The Royce W. Murray Young Investigator Award was renamed in 2014.  Royce W. Murray, who counts among his many honors, was also the the 1988 Charles N. Reilley Awardee.  The decision to change the name of the award was based on Professor Murray’s long history of outstanding and inspiring research and, importantly, his mentoring and supporting young electroanalytical chemists. The latter included his undergraduate and graduate research students, postdoctoral associates, colleagues at the University of North Carolina, and other scholars who visited his laboratory over a career that has spanned more than 50 years.  In addition, Prof. Murray has given generously of his time to informally mentor three generations of young electrochemists who did not have a direct association with his research group. These activities have helped to ensure the vitality of the field of electrochemistry generally, and electroanalytical chemistry specifically. 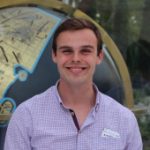 Jeffrey Dick earned a BS in Chemistry from Ball State University (2013) and a PhD in Chemistry from the University of Texas at Austin in 2017 under Al Bard’s supervision. After a short postdoctoral appointment at UT in Kyle Miller’s genome integrity lab, Jeffrey started his independent career at the University of North Carolina at Chapel Hill in July 2018. Over the past 4 years, Jeffrey’s group has developed new measurement tools to probe how chemistry changes in small volumes and how nature takes advantage of such changes for the genesis and propagation of life. In Summer 2022, Jeffrey moved his laboratory to Purdue University.

Nominations should include a nomination letter describing the individual’s promise in the area of electroanalytical chemistry, at least one seconding letter of support, and a curriculum vitae for the nominee. All nomination materials will be retained by SEAC. Once nominated, an individual will be considered for the Murray Award without being re-nominated for three years, unless the nominee is more than ten years past awarding of their Ph.D. or other terminal degree. The retained nominations can be updated annually by the nominator as needed to best reflect the nominee’s accomplishments to date.

Nominations for the 2024 Royce W. Murray Young Investigator Award will be accepted until April 1, 2023.

Nominations should be submitted as a single PDF attachment to the Award’s Committee Chair:

University of Texas at Austin