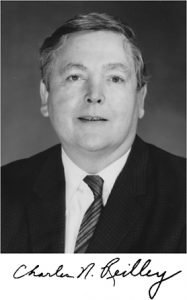 The Charles N. Reilley Award in Electroanalytical Chemistry is given in memory of one of the most distinguished analytical chemists of the 20th century.  Reilley’s interests were both fundamental and broad; he made seminal contributions not only to electroanalysis, but also optical spectroscopy, NMR, chromatography, data analysis, instrumentation, and surface analysis.  The signature of his research was to decline empiricism, seeking a basic understanding of measurements and detection schemes.  Reilley recognized that measuring things is at the heart of modern chemistry. Reilley is central in the history of the Society for Electroanalytical Chemistry, which was formed following his death in 1981, as a vehicle for managing the award.  A Biography of Charles N. Reilley was written by Royce Murray for the National Academies Press in 2006. 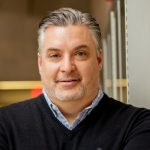 Lane Baker obtained his PhD from Texas A&M University (2001).  After completing postdoctoral appointments at the Naval Research Laboratory (2004), and the University of Florida (2006), he started as an Assistant Professor in the Department of Chemistry at Indiana University in 2006, rising to a James F. Jackson Chair (2014) and Professor in 2018.  In 2022, Baker moved to the Department of Chemistry at Texas A&M. Baker’s research group focuses on nanoscale electrochemistry, especially scanning ion conductance microscopy.  Baker is a Fellow of the American Chemical Society and the Royal Society of Chemistry. His previous awards include a CAREER Award from the National Science Foundation, a Cottrell Scholar’s Award from the Research Corporation for Scientific Advancement, the Young Investigator Award from the Society for Electroanalytical Chemistry (SEAC), the American Chemical Society Division of Analytical Chemistry Award in Electrochemistry, and a special creativity award from the National Science Foundation.  Baker served as Chair for the Division of Analytical Chemistry of the American Chemical Society in 2019.  Baker has previously served on the Board of Directors for SEAC and founded the SEAC student group meeting.

Nominations for the Reilley Award should include a letter of nomination describing the individual’s significant contributions to electroanalytical chemistry, at least two seconding letters of support, and a curriculum vitae for the individual. All nomination materials will be retained by SEAC. Once nominated, the nominee will be considered for the Reilley Award for a total of three years without being re-nominated. However, an updated vitae should be given to the chair of the award’s committee. The submission of additional supporting information or a re-nomination is welcome at any time prior to the 2023 award nomination deadline of April 1, 2023.

Nominations for the 2024 Charles N. Reilley Award will be accepted until April 1, 2023.

Nominations should be submitted as a single PDF attachment to the Award’s Committee Chair:

University of Texas at Austin